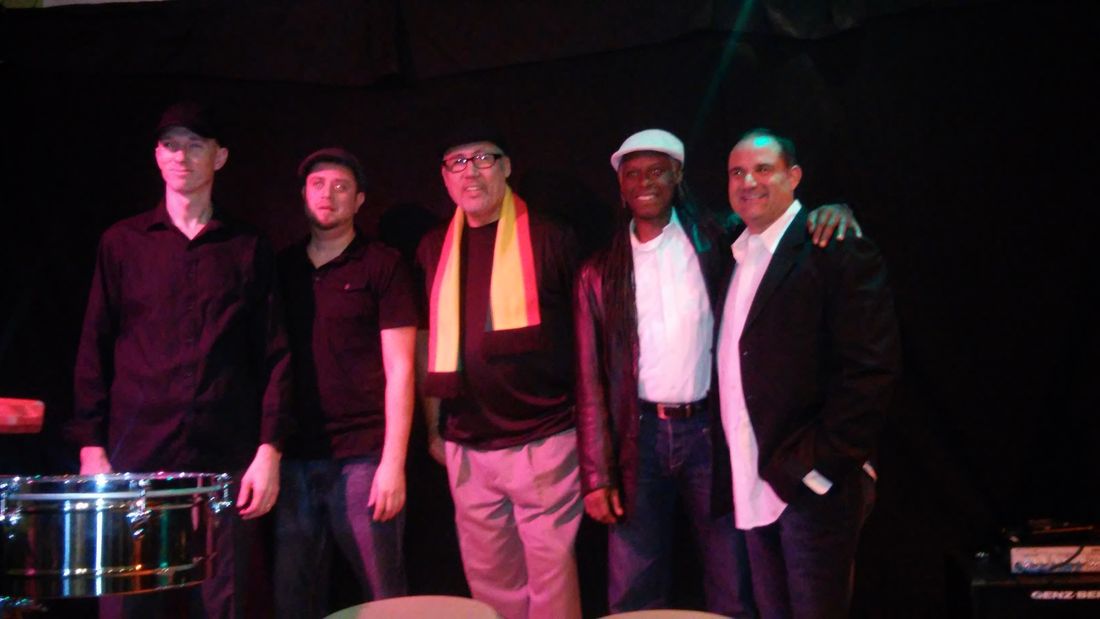 Share photo gallery
QUINTO SON aka SON DE LA LOMA is a 5 piece Latin band based out of Fredericksburg, VA. Each musician brings between 20-30 years’ experience individually to create a rhythmically fit sound from a Salsa point of view given the untraditional size of the band. They play a high energy mixture of Salsa, Cumbia and Merenque. Their set consists of originals and covers. Traditionally, there are 10-15 members in a Salsa setting. Through multi-tasking and having each member take on multiple simultaneous roles, they are able to have a 5 piece band with a 10 piece sound. You can find them playing several times a month in the area.

JOHNNY VALENCIA (Drums, Timbales, Bongo, Percussion, Vocals)
-Was born to Colombian parents in Queens, NYC. As a child his nightly lullabies consisted of his father playing guitar to traditional Colombian folk music such as Bambuco and Pasillo (Andean Folkore) It made a lasting impact on his love of music. He began playing drums and percussion at 10. Growing up in NYC during the 80’s he was exposed to every genre of music possible. Versatile in many styles and comfortable behind the kit and timbales, he played Rock, Funk, Punk, Hip Hop, Jazz, Latin Jazz, Salsa and World Music. In 2002 he moved to Fredericksburg, VA. Since then, he has been playing with  talented local artists from Baltimore to Richmond in addition to some of the biggest names in Salsa today.

DANIEL ALEXANDER (Bass/Vocals)
-Began his musical career in Peru as a young man. Looking for broader horizons, he migrated to Washington D.C. in the mid   70’s. After working with various local bands he founded Orquesta Peligro in 1979, which became the most popular and successful Latin band in the DC metro area. Orquesta Peligro was one of the most beloved Latin bands that often shared the stage with some of the biggest names in salsa. Their captivating sounds earned them many awards including the Washington Area Music Award and were invited to perform at the Hispanic Heritage Awards ceremony. After 25 years of a successful musical career with his band, Daniel decided to explore other avenues of music and focus on his passion, writing and composing. He has continued to collaborate with fellow musicians inspired by his everlasting love for the Afro-Cuban art.

LEONARDO GARCIA (Piano/Keys)
- an accomplished keyboardist, pianist and composer. Styles include Jazz, Latin, and Salsa and Rock Leonardo is a recording artist and has performed with various groups and orchestras in the DC area for over 30 years.
Latest groups he is performing with include: Orquesta La Romana, SalBomPle, Son de la Loma/Quinto Son, Saoco, Justine Miller, and ESL Latin Combo.

ALBERTO LIMONTA PEREZ aka "LIMON" (percussion, congas, bata and vocals):
-Director/Creator of "Afro Funk All Stars" and "Sabor Afrocubano"(U.S 2011-2013) and Latin Jazz groups "Limon y Sentimiento Latino" and "Cubaneando" U.K 2004-2010. He is a  world-renowned conga percussionist,  born in Havana Cuba on September 21, 1966. He has spent his musical career of over 30 years performing as a folkloric and popular dancer as well as vocalist and percussionist in Cuba, U.K/Europe and the U.S. His areas of expertise are the percussion and dance styles of rumba, Afro-Cuban folkloric tradition and the popular styles of Salsa. Highly regarded in Cuba, he was a percussionist, chorus and solo vocalist with the legendary Havana rumba group "Clave y Guaguanco". He is also an experienced music director, composer and choreographer. Limon moved from Cuba to the U.K in 2004-2010. He moved permanently to Fredericksburg, VA in November 2010 where he now performs and teaches workshops in Afro-Cuban percussion and rhythm for adults and children as well as all the Latin dances. Limon performs originally choreographed dance performances for private functions, teaches and DJ's for the DC Casineros. He performs with "Orishabo" authentic Cuban rumba in the Washington DC area and now is a member of Son de la Loma/Quinto Son group.
TIM OTIS (Trumpet)
-Began performing professionally on the trumpet at the age of 14. For the last 20 years he has lived and performed
around the world as a trumpet player and music director for Marine Corps bands and as a freelance musician. He has
shared the stage with country music stars Amy Grant and Vince Gill, jazz icons Slide Hampton and Bobby McFerrin,
Latin music legend Poncho Sanchez and many more.